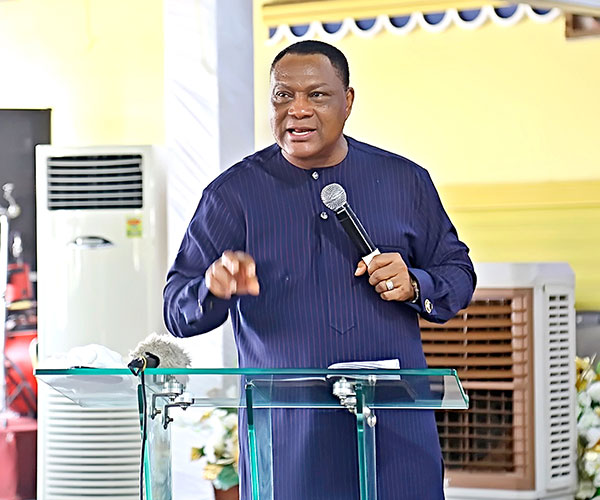 The First Vice President of the Ghana Pentecostal and Charismatic Council, Most Rev. Sam Korankye Ankrah has noted that the decision of government to lift ban on churches was not premature but rather the President, Nana Addo Dankwa Akuffo Addo was sensitive to the spiritual needs of Christians.

According to him, the decision came at a point where some Christians were crying and expressing hunger for church so they could fellowship as Christians for their spiritual growth.

He said this in a side-line interview with GPCC News Team after the Ministry of Local Government and Rural Development made a donation to the Faith –Based Organisations in Accra.

“The President was sensitive to the spiritual needs and the plight of this nation and also asked a question for how long will they put the ban on churches? It cannot continue forever therefore some way somehow they needed to ease the restrictions. Yes the numbers of COVID-19 pandemic are rising, but this enemy is here to stay and we as a nation are supporting the government to resolve and combat this virus,” Most Rev. Korankye-Ankrah expressed.

Most Rev. Korankye-Ankrah who is also the General Overseer of Royalhouse Chapel International pledged their support for the government and assured government as they opened up they would not take things for granted.

The First Vice President indicated that they would enforce the protocols and etiquette among all the rules that are governing the reopening of Churches.

As part of efforts at supporting the government to combat the pandemic, he pointed out that they would use their pulpits to educate their members to know how to stay safe as these are not normal times, hence this pandemic is here to stay.

“The President did not rush to lift the ban on churches rather he responded to the spiritual needs of his children, therefore we will do our possible best to support the government to fight this pandemic,” he indicated.

The revered called on all stakeholders and Ghanaians to bring hands on deck to fight the pandemic so they could go back to normalcy.

The President while delivering the 10th COVID-19 update address said effective Friday, June 5, 2020, the process of easing restrictions will start with church and mosque activities.

He also mentioned that regulatory agencies will undertake random checks to ensure full compliance with this directive.

He said churches can hold an hour long service with not more than 100 participants at a time.

“As I stated in my May Day address, I’m now in a position to outline the roadmap for easing safely the restrictions. Ours is going to be a phased approach involving a selective list of public gatherings based on the risk profile, socio-economic effect and most importantly, our capacity to enforce, respond and prevent a flare-up in cases. With effect from Friday, 5th June, we will begin stage one of the process of easing restrictions”.

“An abridged format for religious services can commence. Twenty-five percent attendance with a maximum number of congregants can worship at a time in church or mosque with the mandatory one-meter rule of social distancing between congregants,” the President said.